The Fortress of Louisbourg is a National Historic Site of Canada and the location of a one-quarter partial reconstruction of an 18th-century French fortress at Louisbourg on Cape Breton Island, Nova Scotia. Its two sieges, especially that of 1758, were turning points in the Anglo-French struggle for what today is Canada.

The original settlement was made in 1713, and initially called Havre à l'Anglois. Subsequently, the fishing port grew to become a major commercial port and a strongly defended fortress. The fortifications eventually surrounded the town. The walls were constructed mainly between 1720 and 1740. By the mid-1740s Louisbourg, named for Louis XIV of France, was one of the most extensive (and expensive) European fortifications constructed in North America. It was supported by two smaller garrisons on Île Royale located at present-day St. Peter's and Englishtown. The Fortress of Louisbourg suffered key weaknesses, since it was erected on low-lying ground commanded by nearby hills and its design was directed mainly toward sea-based assaults, leaving the land-facing defences relatively weak. A third weakness was that it was a long way from France or Quebec, from which reinforcements might be sent. It was captured by British colonists in 1745, and was a major bargaining chip in the negotiations leading to the 1748 treaty ending the War of the Austrian Succession. It was returned to the French in exchange for border towns in what is today Belgium. It was captured again in 1758 by British forces in the Seven Years' War, after which its fortifications were systematically destroyed by British engineers. The British continued to have a garrison at Louisbourg until 1768.

The fortress and town were partially reconstructed in the 1960s and 1970s, using some of the original stonework, which provided jobs for unemployed coal miners. The head stonemason for this project was Ron Bovaird. The site is operated by Parks Canada as a living history museum. The site stands as the largest reconstruction project in North America. 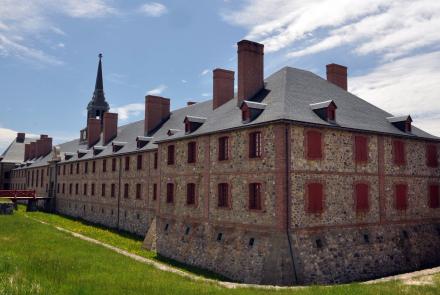